Many of us modern DJ’s have never had the privilege to see, never mind to use one of these.

Rotary mixers were the very first mixers which allowed the development of the concept of disk jockey mixing and discotheques in the mid 1960’s. Rudy Bozak was the first to bring a quality mixer for DJ’s to play disco in clubs. Due to their simple architecture, they have amazing sound quality. Its no surprise where and how their name was derived,

The rotary mixer acquired its fame in New York City in the 1970’s. The Bozak mixer; as others would call it; otherwise the Rotary mixer was born in a golden era, when sound was pioneered by engineers determined to discover new boundaries. Rudy Bozak was one of the audio pioneers spanning the 1930’s to the 1970’s. During the 1950’s music was forever evolving from rock and roll to Rnb and then the Rnb tempo went up in the 70’s giving birth to disco. The peak of the development of rotary mixers was reached with the stereo Bozak CMA 10-2DL which was the first commercially produced Dj mixer. This was ground breaking of course due to the fact that DJ’s finally had a mixer designed to meet their requirements. The Bozak CMA 10-2DL unit was very quickly accepted as the standard of its time. The Bozak mixers were very expensive; they used high grade Allen Bradley components, hand selected transistors and were of modular construction for ease of servicing and expansion.

Bozak; as a manufacturing company didn’t cease the production of dj mixers until some years after the death of Rudy Bozak. Buzzy Beck (a former engineer) along side Paul Hammarlund carried on the work for a short period while the famed CMA series of mixers was being cloned by UREI as their model1620 until they ceased production and at this point the mixer was cloned by Rane Corp as their model 2016. In 2005, Soundcraft began to offer the UREI model-2016, only it was now badged Soundcraft 2016LE, LE for Limited Edition.

Today the Bozak brand is owned by Analogue developments LTD who have released electronic products such as the AR-6 Dj mixer, they are also in control and owners of the website www.bozak.com

Rudy Bozak is remembered today for his advance design of DJ mixers and in fact his legacy lives on today. Most modern manufactures have copied Bozaks original mixer in some shape or form but have never matched its unique sound, smoothness or warmth. 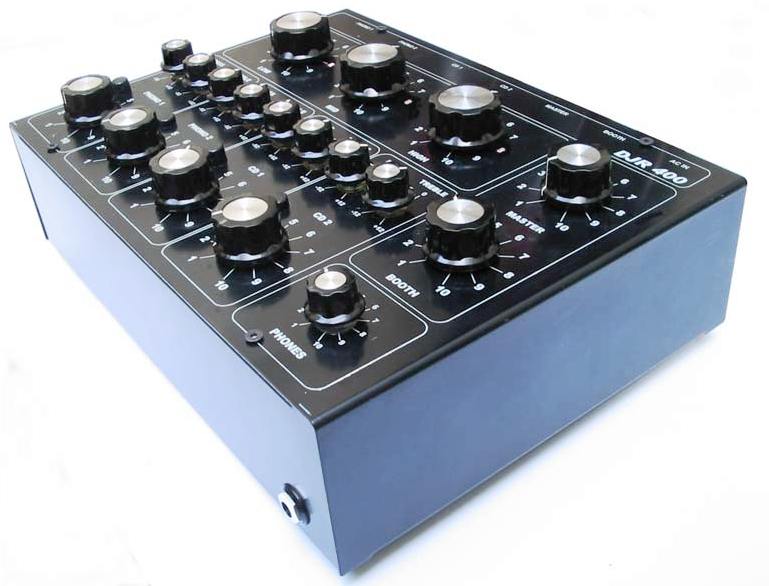 Today’s most popular rotary mixer is the DJR 400

The DJR 400 was conceived by Jerome barbe and Dj Deep and is known to be a new concept of “travel mixer” as it is the first portable rotary mixer, very easy to plug in with its back connections and you do not have to mount/rack it, nor perform long sound checks once connected, just plug and play.

The DJR 400‘s reputation has been on the rise so much that the custom, hand assembled mixer comes with a 2 year waiting list.