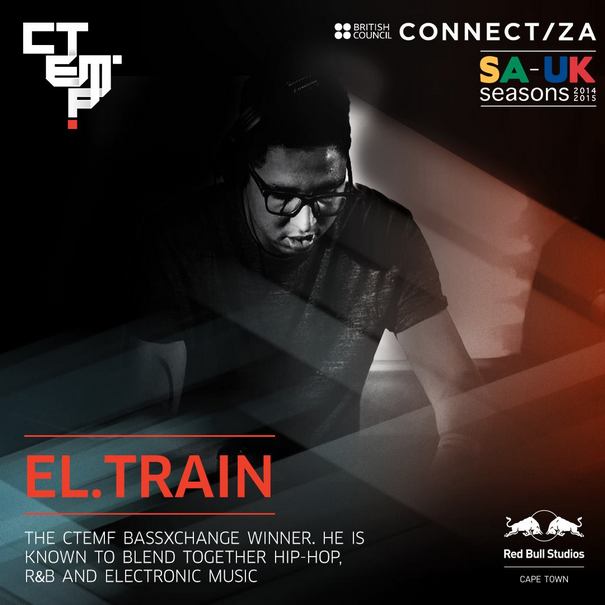 El.Train will be jetted off to Cape Town, South Africa from 3rd to 9th February 2015 where he will be given the opportunity to showcase his music through the Cape Town Electronic Music Festival Programme.

“I uploaded my mix for the BassXchange competition but then thought nothing else of it. When I opened the e-mail to find out I’d won I was so shocked. I’m really excited to come over to South Africa and share my music with the people in Cape Town and also to experience South Africa as a whole.  My Dad is from Zimbabwe I’ve visited there a couple of times but have never had the opportunity to cross the border into South Africa”  – El.Train, 2015

The competition was judged by a panel including Cape Town Electronic Music Festival headliners –Felix Laband and Four Tet.

“It had the most interesting track selection and he’d made his own edits and versions of tracks to use.” – Four Tet, 2015

It is designed to be the ultimate cultural exchange programme for an electronic music artist and aims to be a career-boosting opportunity for a bright new talent by offering the unique opportunity to visit South Africa, showcase their music at a leading local festival and network with the South African music community.

BassXchange UK/ZA 2014 winner Murder He Wrote described the trip as “a genuine life-changing experience” – his visit to Cape Town was the catalyst for starting his own label, which will soon be releasing music from South African artists.

Editor’s Sidenote: This project is part of the SA-UK Seasons 2014 & 2015, a partnership between the Department of Arts & Culture, South Africa and the British Council.