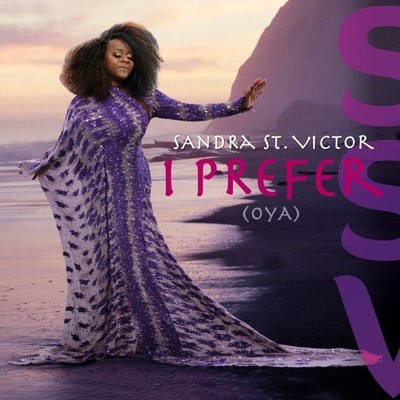 Sandra St. Victor is one of the most revered vocalists among real singers of Soul music.

“She is one of those artists who is admired by other artists–she’s that good. She has an ability to move from Soul to Funk to Jazz to multicultural contexts and holds it all together with a spirit that can’t be denied. I think her new album is the best work of her career and will be one of the most impressive releases of 2013”.

With a collaboration history that covers the likes of Chaka Khan, Prince and Curtis Mayfield, Sandra St. Victor already has the legends’ seals of approval.

“I’ve always sang my life in my songs. These most recent years, in relative silence, I’ve raised two beautiful daughters. This time was for me more creative observation at life and my place in it as an artist”, shares St.Victor.

“On Oya’s Daughter (The Album), these new stories and songs reflect this new sight. Lyrically, I’m blunter and still positive. I’m less concerned with opinions, more protective of my own preferences and realities” she confesses.

Why the name Oya?

Oya is the Orisha of change, storms. She is the owner of the winds. Wind is symbolic of the power of thought. My daily movement ask Oya to lift the words of my songs into the breeze, on the air.

Oya’s Daughter will be released in September 2013. It is produced by Mark de Clive-Lowe and mixed by Ty Macklin.