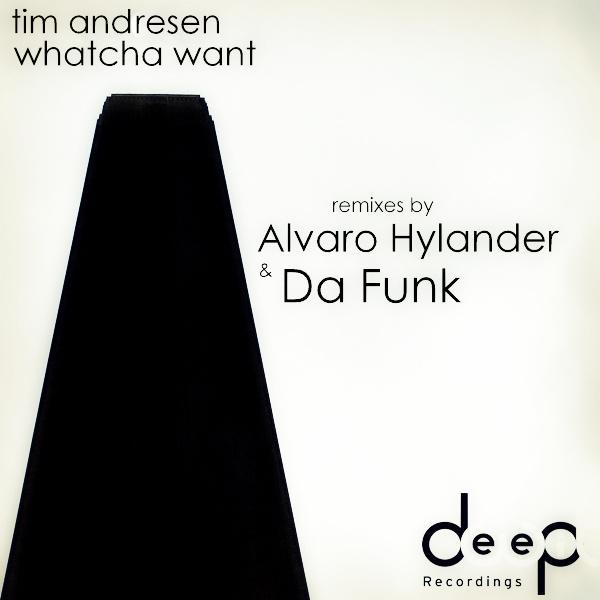 After a bit of rummaging through our previously received promos I came across this brilliantly crafted slice of Deep House that has left my head still bobbing long after I’ve pressed stop.

The ‘Whatcha Want’ EP comes from three of the best [I’d like to think] underground Deep House and House producers and label owners in Europe I’ve come across recently.

Tim Andresen, a Danish producer, DJ and label owner of ‘What Happens’. He’s also one of the main event organizers of Culture Box in Copenhagen, putting together some of the best parties in Scandinavia.

His Original “Whatcha Want” offers a simple, clean, smooth and emotive Deep House track that showcases his production skills and ability to offer up something refreshing and addictive.

The first remix comes from Da Funk, who also has been running his own label ‘Acryl Music’ for the past 8 years. He has become one of the upfront producers of Deep House in the underground scene.

His remix, “Da Funk’s Fancy Some 909 Dub”, takes you back in time with its vintage and real sounds, combined with the classic Da Funk style. It’s a lush track with a bit of acid thrown in the mix for the dance floor.

The last remix comes from one of my favourite producer and Deepwit Recordings label owner Alvaro Hylander. The label has produced a very consistent Deep House catalogue in the scene currently.

His is a deeply intoxicating bumping Deep House track. It’s infused with his signature rhythms and groove he has built his name on. The track is strictly Deep House no two ways about it – just the way we love it. It’s tailored purely for dancing.

With three of the best producers who are consistently making their ascendance in the higher echelons of Deep House – this release is about the quality and uniqueness of each producer.