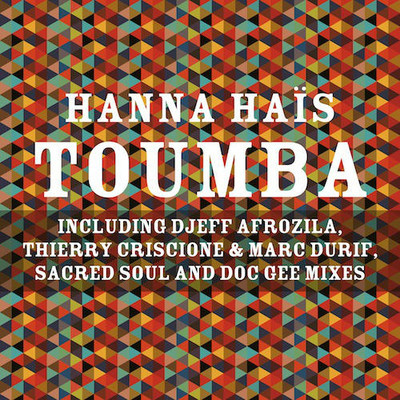 ‘Fresh’ is a term often used to describe a sound that captures your attention the first time you hear it, such is the case with Toumba, an extremely catchy tune from the talented audibly-seducing Hanna Hais.

Her vocals on the original mix will cut up the dance floor as hard and deep as the pulsating tribal rhythm of the song. The track is an all round classy production with its traditionally French-inspired instrumentals (accordion) and hip bumping beat. I’m certain it’ll garner plenty of spins on decks everywhere.

The Djeff Elinga remix has been receiving a lot of positive feedback from some of the genre’s leading production gurus and it’s no surprise as it’s clearly evident once Djeff’s groovy rendition of the track lands on your eardrums.

It’s got Afro-inspired deep hypnotic percussions and keys, which makes for a very solid and appealing remix package. Along with the original mix, it’s another star production on this EP.

We shift down a gear with the Sacred Soul Cosmic Mix, which has a much deeper ambience and groove to it. The techno-laden sounds are both sophisticated and rhythmic. They compliment the hypnotic French lyrics of Hais perfectly to create a harmonic soul-tech marriage.

Rounding off the remix package is a remix by Thierry Criscione and Marc Durif who the lift the tempo with an electronic-laced version of the track. Definitely one for those after-hours mixes as it sets the tone with a deeper electronic atmosphere to keep bodies glued to the floor and gets my nod as one as to listen out for the discerning House head.