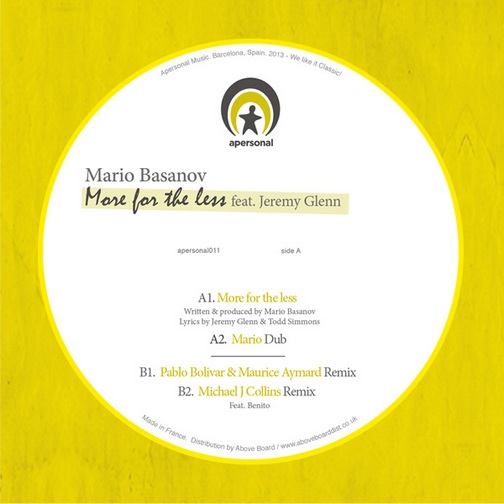 Lithuanian producer, Mario Basanov, had quite a picture perfect 2012 with his LP on the brilliant label ‘Needwant’ capturing many with its sleek, contemporary House, Disco and airy, melodic sensibilities.

This time around he has teamed up with Grand Corporation collaborator and exceptional vocalist, Jeremy Glenn, on the EP ‘More for the Less’

Jeremy Glenn, a Toronto native, appeared recently on the label ‘Classic’ as a vocalist on Andy Meecham (Emperor Machine) and Stevie Kotey’s Grand Corporation project as well as remixing and producing for the likes of B-Pitch, Blackstrobe and Moda.

Basanov’s dub walks a line between mid-nineties, vocal cut up dubs and Nu-Disco drum work and the result is a fresh and punchy dance floor interpretation.

Desolat’s Pablo Bolivar and ‘Apersonal/Galaktika’ man Maurice Aymard team up on the one of the remixes. It’s somewhat a departure from their respective styles, however staying close to the feel of the original; a bumping yet laid back version that teases the original song into the mix with just the right amount of restraint.

Michael J Collins, having made a name for himself on the labels ‘My Favourite Robot’ and ‘Wolf & Lamb’, returns from a long production break with gusto in his remix.

Incredibly detailed, achingly melodic and intricately rhythmic, Collins’ remix is fathoms deep boogie of the highest order. Basanov closes the EP with a ‘Redub’ that takes the track into a sunrise dance floor bliss for tired legs.