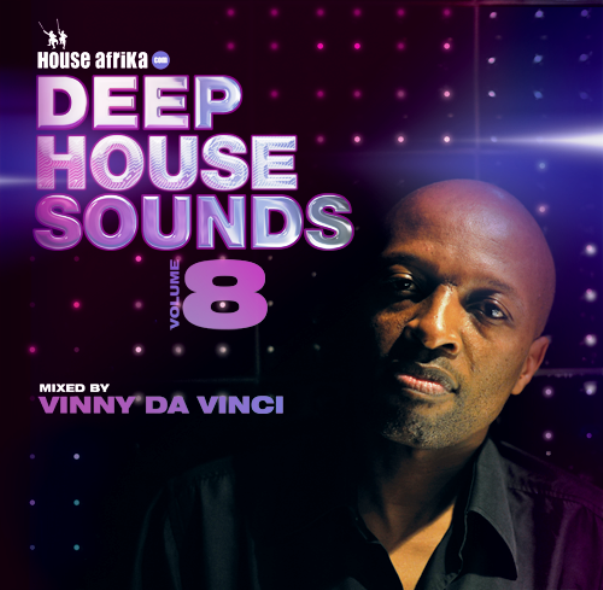 With house music at an unprecedented apex in South Africa, there’s no better time for pioneering compilation line ‘Deep House Sounds’ to return.

For almost a decade, this essential series – which is helmed by the country’s most knowledgeable groove guru, Vinny Da Vinci – has been charting the deepest currents in the global house scene, rounding up the most vital rhythms that are causing dancefloor vibrations down south.

And like its predecessors, Volume 8 of ‘House Afrika: Deep House Sounds’ is a critical mix; a timely reminder of what a cutting-edge house landscape this country has. The mix achieves this by coupling international tracks from some of the scene’s leading names (many of whom have visas for these shores) with contributions from a few high-profile local names.

Vinny kick-starts this journey into sound with the sweetly sweeping vocals of Priss, backed up with crucial kick drums from the combined talents of Boddhi Satva and Martin “AtJazz” Iveson, both of whom recently visited SA. Abicah Soul is also responsible for the remix of the second cut on the compilation, from TL Cross, while AtJazz returns later in the mix with a reworking of Warm Days featuring Swindle and Natalie Maddix.

Other recent (and regular) tourists to these shores featured here include Frenchmen Rocco and Manoo, who collaborate in the “Insomnia”-inducing supergroup Rodamaal. The latter remixes the hottest lady in house music right now, Maya Jane Coles, while the former is on remix duty for South Africa’s Mr. Cee, from Blackwhole (of “1000 Seconds” fame).

This is just one of the instances on ‘DHS 8’ where sizzling SA talent meets the leading edge of overseas dance. Demonstrating what a cauldron this country has become for the creation of international floor-fillers, hotly-tipped local singer Brian Temba appears on a cut from another recent visitor, Simbad (appropriately titled “Come Join In”), while Black Coffee (a local name that’s on the lips of just about every house connoisseur on the planet at the moment) remixes Richard Earnshaw featuring Imogen Ryall’s “Cry Me A River”.

Earnshaw is also behind one of the biggest tracks amongst a pretty large haul, Spiritchaser’s “These Tears”, which is bound to be one of this collection’s strongest selling points. This is not to downplay the unmissable nature of tracks from underground legends like France’s Aqua Bassino; Germany’s Rainer Truby (aka Motor City Drum Ensemble), who remix Eddy Meets Yannah; Russ Gabriel, who refits another future classic from Iz & Diz; and prolific vocalist Arnold Jarvis, appearing alongside Yass.

These rhythms have all been road-tested by Vinny – with bombshell results – and are sequenced into an indispensable document that sums up the state of house in SA perfectly – an all-important purchase.