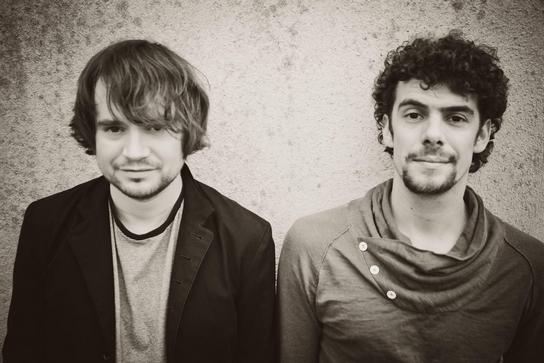 As DJ’s, producers and owners of the imprint ‘Kittball Records’, Tube & Berger aka Arndt Roerig and Marko Vidovic, certainly have many talents.

They begun their musical careers in a punk band at the tender age of sixteen, but quickly progressed to producing a unique brand of organic Electronic music after an introduction to House and Techno in the nineties.

Since a mammoth breakthrough in 2004, the duo has gone from strength to strength. On their independent label, ‘Kittball Records’ with DJ Juliet Sikora, their music has had consistent global success.

Although Tube & Berger is a great name, I assume it’s your adopted DJ names. How did the name come about?

‘We adopted the nicknames from our time at school together. When we had our first record deal back in 2004, all our friends told us: “C’mon! You gotta call yourselves Tube & Berger”. We obviously had no other choice.’

Where are you from in the world and what is happening there? Who are the big DJ players in your scene?

‘We both grew up in a small industrial town called Solingen in the North West of Germany. Despite the fact that there’s little to do in our hometown, the cities in our area have a big and dynamic scene with many clubs.

Guys like Marc Romboy, Robert Babizc or Timo Maas come from our area and their music was, and always will be, a great inspiration for us.’

‘How would you describe your sound and what is it about your production that make it stand out?

‘Someone told us that we never lost our early nineties Punk attitude and others say we are a kind of new-age Techno hippies. We agree with both sides. In our new album we increasingly focused on making music and not just tracks. Being in the studio was great fun – especially when we used acoustic instruments or some ancient effect boxes to generate a warm and special kind of sound.

‘You could describe us as organic Deep/Tech House with a slice of sixties music flavour and a positive vibe… But words are meaningless, aren’t they?’

If you were to be placed in your ultimate line up for a club, who would be on the bill with you?

‘Ok, we‘d start with some rarely known underground acts like Daft Punk, The Chemical Brothers and let’s say, Kraftwerk. Later on, we’d have an exclusive The KLF DJ set and on the second floorwe‘d go for Solomun and Maceo Plex. Back to back and all night long of course!’

‘You didn’t start out as an Electronic music act. What music were you making before you became DJ’s and producers and what made you change your sound?’

‘We started off as a punk band at the age of 15 and were always into Rock n’ Roll. Bands such as The Who, The Clash or The Doors will always be our heroes and still inspire us today. However it was two albums specifically, that made us fall in love with Electronic music.

One being Westbam’s Bam Bam Bam and the other, Daft Punk’s Homework. Homework in particular blew our minds and after listening to it for weeks, we decided to become electronic artists ourselves.’

‘You had big success with your single Straight Ahead featuring Chrissie Hynde on vocals, especially in the USA. Was this your first big break?’

‘Absolutely! Actually it was one of the first tracks we ever released. It was number one in the UK buzz chart as well as the US billboard dance chart. ‘Despite being young and clueless, we started touring immediately and it felt like living the dream. Of course we signed some bad deals and made some mistakes that had to be made, but we’re both sure that Straight Ahead was one of the best things to ever happen in our lives!’

‘Tell us about your current single Soulgood, how is it doing and are there any big DJs that you know who are playing it?’

‘We received great feedback from Soulgood from all over the world, which made us very happy! It was one of the most charted tracks on Beatport this March and the video is frequently shown on MTV Europe and various other music channels.

To be honest, everything concerning the track just feels right and… soulgood!’

You have your own label. What is it called and what artists are you releasing on it?

‘Our label has the strange name of ‘Kittball Records’ and truly is our baby! We see this as a family thing and concentrate on a small number of artists. ‘For our charity project ‘It Began In Africa’, we had many great artists exclusively on our compilations, such as Format B, Timo Maas, Pirupa or Gorge.

However, normally we focus on our buddies like Ante Perry, Juliet Sikora or Aki Bergen. Aki Bergen will release an EP on Kittball soon.’

Your current big project is your new album, what’s the vibe? Is it a collection of your new club tracks?

After eight years of DJing and producing, we finally made it. The funny thing is that we’ve been talking of an approaching album since 2005… More and more people therefore started wondering when this album would be out. However, some things just take time and after finishing Introlution we were finally satisfied.

‘There are club tracks on it for sure but we wanted it to ‘work’ in the car, whilst you’re chilling or whilst you have sex. And we have to tell you, it works!’

What singles are you releasing from the album?

‘We’ve been thinking about this for a long time now. Personally we’d love to release almost every track, but in the end we will choose from three personal favourites and offer them with some remixes by some dope artists.

We think it’s better not to tell you which ones are our favourites because we want you to be open minded with your first listen.’

Where can we see you perform in the next few months?

We’ll play some festivals such as Mayday in Germany and the Soul Tech Festival in Mexico and we’ll go on a club tour with the album. Additionally, we’re already looking forward to the Introlution release party in Berlin and are excited to revisit Ibiza and play some special venues over there. Last but not least, we’re excited to play in Croatia this summer.

Some are calling it the new ‘Party-Mekka’, so party animals Tube & Berger will check it out for you!’