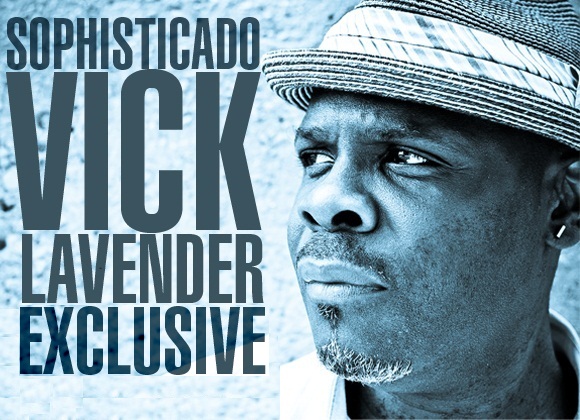 Vick Lavender has impeccable credentials a man that needs no introduction, from being a member of the legendary Strictly Jazz Unit (SJU) founded by maestro Glenn Underground to recording with world the renowned DJ favourite on “PM Blues”. He also has writing credits on some classic house music singles, including Sun’s “Father’s Little Girl” and “Medone’s Thoughts” from the ‘Future Parables’ album. Lately, Lavender’s digital label Sophisticado Recordings has been responsible for some of the most innovatively deep recordings in recent memory, from jazz fusion-based tracks like “Vida” to house anthems like “First Kiss” and “Afterparty For Two”.

Lavender started DJ’ing in the late 80’s, playing in such chicago clubs as Red Dog, Sonotech, Betty’s blue star lounge, Sinabar, The Funky Budda Lounge, not to mention becoming a staple at the WMC since the late 90’s. His production began in the mid 90’s with SJU, he then continued to become a co-founder of the legendary house ensemble Mr Ali with Jere Mcallister. The chicago based live house music ensemble has been responsible for some of the new classics such as” Missing you”, Rainy day, Cast your spell, About us, and many more…

Vick tells us about his upbringing about being born in Monroe Louisiana to moving to Chicago. He tells us about the love he has for Jazz and House Music and his expirences of being a band memeber of the world renowned SJU. We talk about the inspiration he draws from the South African massives and he gives us the 411 on his latest offering under BBB Music.

I was born in Monroe Louisiana and moved to Chicago at the age of 4, Chicago is where I’ve spent pretty much my entire life.

How important is it to you, being able to produce different styles (genres) of music?

It’s very important to me to be able to give different points of views of my music, I’d really hate to limit myself in terms of my sound. Growing up and being exposed to different artists has been a blessing for me it’s shown me that you can fuse different genres of music together and if it’s done properly and it’ll work.

How do you explain and express your love for Jazz and House music?

Well both have been extremely prevalent in my development as far as music is concerned. Ofcourse jazz was always on at home as a youth growing up, and when I became a teenager house music was just starting to become a major force in Chicago. House brought a level of excitement and anticipation to Chicago that probably hadn’t been felt or seen in quite sometime, and so me falling into house was pretty much a no brainer.

SJU is massive! How is it working with other, equally, talented artists, such as Glenn underground?

First let me start by saying I learned a ton from working with those guys, Boo and ofcourse GU. GU taught me a lot about sound scaping and drum programming watching him was big for me. The technical aspect he (GU) taught me was huge as well, if you ever get a chance to watch him in the lab then you’ll get a chance to see what I’m speaking of… he’s basically a genius. 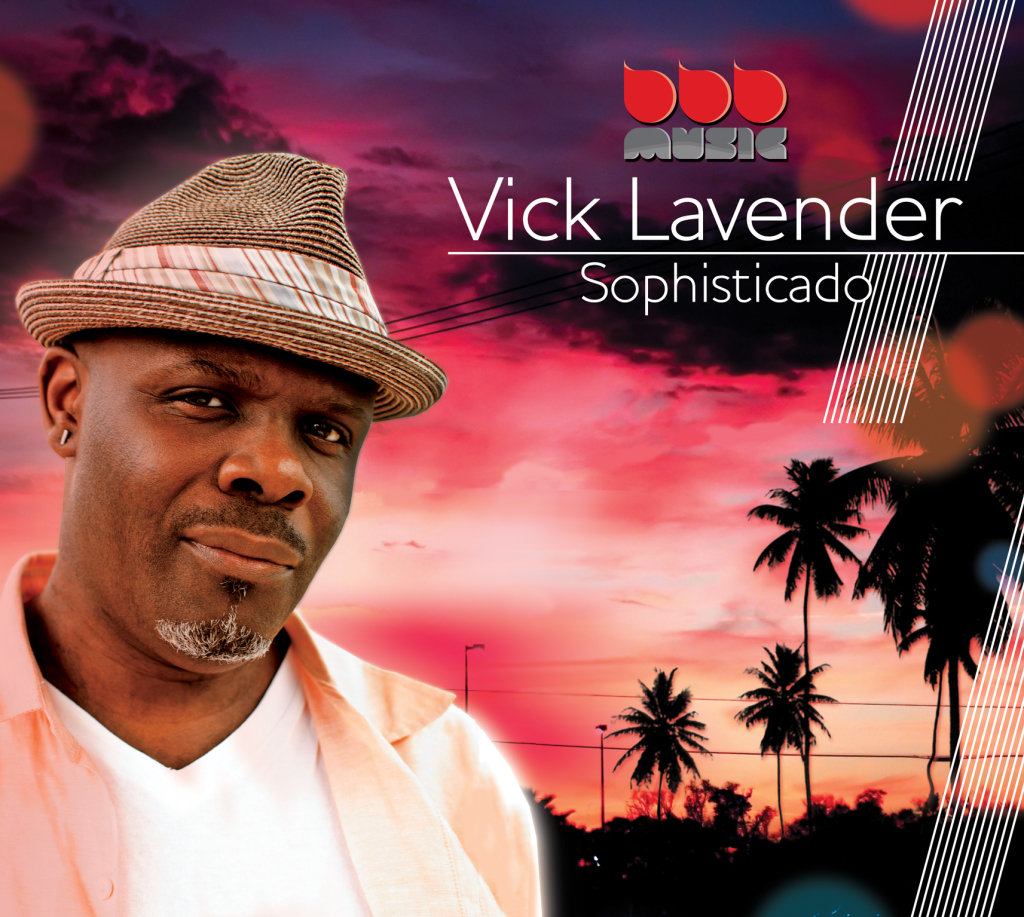 With his origins in Cuba, African and Latin music have been a constant influence on Vick Lavender. And they’ve assisted him to amass a substantial catalogue of eclectic beats that straddle celebratory downtempo goodness and ecstatic dancefloor grooves. BBB MUSIC in South Africa have captured the essence of his 20-plus years as a global music aficionado and ambassador across two CDs tagged ‘SOPHISTICADO’; they’re sets that showcase Lavender’s masterful fusions of Jazz and Soul and his more house-oriented beats – rhythms representing the mosaic of the African diaspora.

What can we expect from your new album?

The album will consist of many flavours… ofcourse you’ll have the 4 on the floor element (house), and then the neo soul experience, not to mention the jazz/fusion aspect of it all. Listening to so many wonderful artist over the years has made me want to be versatile and making an entire album gives me the opportunity to showcase everything I’ve learned over the years.

Who have you worked with on the album?

The list is quite long and I couldn’t be happier with the talent on the album. I’ve been really blessed to have been surrounded with some of at least in my humble opinion the best musicians and vocalist in the buisness, as well as other producers as remixers on some of my projects.

Why does the African and Latin sound inspire you so much?

That’s a question I’ll never get tired of answering. Let me start by saying Africa is where all rhythm originates so it makes perfect sense that it would be a huge part of my musical format, and the latin aspect is credited to my pops who was born and spent his teenage years in Cuba, it wasn’t until he was a young adult that his family and he migrated to the United States. Needles to say my pops brought that infectious flavor over with him and it would be on display every sunday morning. I never knew the influence it would have over me until I was starting to produce music, then it all became clear that it would have to be a nice part of what I was doing musically.

How has the SA house music scene influenced you?

SA needles to say has been godsend for me and probably a lot of other different artists as well, I tell my colleagues and friends all the time that it’s a must that you get over to SA, it will change your entire perspective on this thing we call house music – in such a way that I would have a hard time explaning, it’s something you’d have to see, words won’t in anyway give you the proper experience that being there in person will. So for me SA has meant the world to me and my career, the people are beautiful espicially the women…lol. But no seriously the entire atmosphere is to die for and there’s no other way to put it. 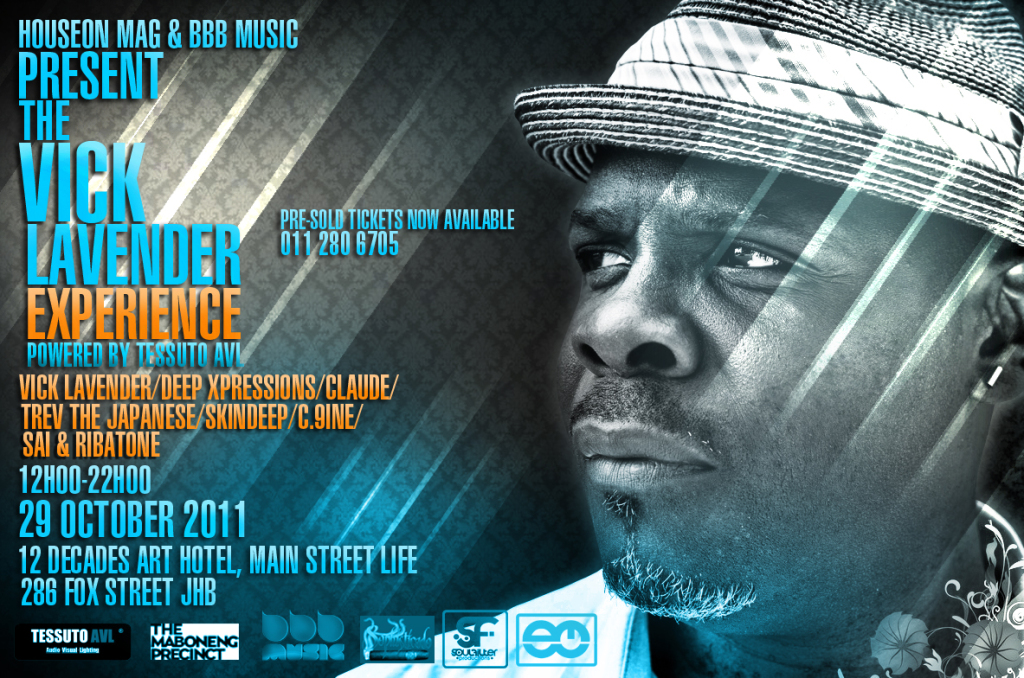 ON THE SOPHISITICADO SA TOUR…

29 October 2011 will see Vick Lavender return to South African shores as Houseonmag partner with BBB Music to present an exclusive day party at the 12 Decades Art Hotel in Main Street Life – Johannesburg. We kick off the ‘Vick Lavender Sophisticado Tour’ in style; a rooftop party with an uncluttered 360 degree view of Jo’burg city, cocktail decor and a sensational line-up of urban and deep house DJs including Vick Lavender, Claude, Deep Xpressions, Skindeep, Sai & Ribatone, Trev The Japenese and live performance by C.9ine. Tickets for ‘The Vick Lavender Experience’ are now on sale, the intimate roof top experience will only cater for 250 guests at a cost of R100 per person, for your bookings call 011 280 6705

The Sophisticado Tour will also see Vick Lavender hit the following towns on these dates: