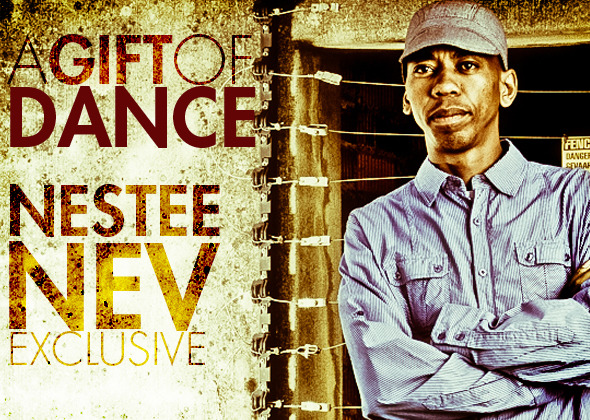 DJ & producer Nastee Nev may be a new found name amongst the public domain but he is definitely not a stranger to the music industry. Neville Moeletsi (real name) born and raised in the township of Ga-Rankuwa found in the east of Tswane, is better known to many as DJ and producer Nastee Nev. His musical journey began at the tender age of 10 and today abound with experience and countless titles under his belt, Nev is arguably one of most talented DJ’s/producers exports from Southern Africa.

Having worked with the likes of Donald Sheffy and Kafele Bandele Nev’s sounds are not foreign to neither the local and international house music scene. He’s remixed titles by the likes of Aphreme, Steven Paradise and Gene King, while his titles have been interpreted by the likes of Andy Compton of Peng Records, UK. His played alongside iconic DJs, including Vinny Da vinci,  Evidence kemp, Quincy Kekana and Oldrin Mogotsi. In this exclusive interview Nev tells us how his recieved great music education from the legend Bob Marley, Gladys knight and Nina Simone. He also takes us through his first gig alongside DJ’s Christos and Bob Mabena and he confirms that house music is his first love.

A FEW MOMENTS WITH NASTEE NEV

Many people don’t know that your music career kicked off in 1995; can you tell us how the journey all began?

My journey began simply because of the love of music and so whatever followed was all worth it for me. I got my big break back in 1995 when I became the resident DJ at the Archie Bold Pub and at that time the likes of Christos, Vinny Da Vinci and Positive K were playing there too. The place also had a lot of celebrities frequenting there, so it was a huge chance for me – I took the opportunity and haven’t looked back since.

You’ve played alongside some of the most iconic radio DJ’s including Bob Mabena, Quincy Kekana and Aldrin Mogotsi; share a fond memory playing alongside any one of these icons…

Yo! At that moment Bob Mabena was my role model, I wanted to be like him. I listened to his show on radio Bob every Friday. I would sit with my headsets on my head in front of the radio waiting for his show to start, so when I got a break to play alongside him at club Gemini – that was like a dream come true!

I remember the first night I played at club Gemini, I played right after Bob (naturally he left the crowd going crazy). DJ Christos was in the DJ booth with us and I was shaking. Christos asked me why I was so nervous and told me I needed to relax – but it wasn’t that easy. I had never played for so many people in a club at the same time. Especially right after a line-up of icons like Bob Mabena, Christos, Oldrin and Evidence Camp.

I remember the first track I dropped was ‘Tears’ by Frankie Knuckles and as they say, the rest is history… I kept playing from that day and I got used to reading the crowd and gained lot of experience. Playing alongside these legends, gave me some of the best moments of my career!

We’ve learnt that you grew up listening to the sounds of legends like Bob Marley, Gladys Knight and Nina Simone amongst others… How have these legends influenced you as a musician?

Back then owning a Bob Marley or Gladys Knight record was like investing in gold. They have inspired me to become as great as they are within my genre of music. I remember when I was younger, my mother and I would sit and sing along to these music greats. I have learned a lot from them, I got to understand music much better, from how instruments are played and how songs are arrangement.

Some have described your music as soulful, deep and highly emotive. How would you best describe your sound and style?

I would definitely say 100% correct – it’s a mix of soulful and deep consisting of jazzy elements.  I think they have defined it well for me, soulful yes, deep yes… music is an art.

Is house music your first love? Or do you produce other types of music genres?

Yeah, I’d say House is my first love, but I do produce other genres like hip hop, kwaito and gospel.

You produce, remix and DJ? Which would you say is your speciality?

I’d say djing as I have 15 years experience in that.  I enjoy all three of them because when you look at it, they are all one package. They go hand in hand for me.

Inspiration… some days it’s not there and other days it overflows, it comes from within. Some of my inspiration comes from being out there. Everything around me, whether its my family, friends or just listening to different sounds.

Is A Gift Of Dance your first studio album?

No, My first album was Private Lessons.

What is the significance of the name of the album, ‘A Gift of Dance’ does it have a deeper meaning?

Its me sharing all my passion with those who appreciate my music. I think lot of people have been waiting very long for my album, so I decided to call it “A Gift Of Dance” as it’s a gift from me to the people.

What can we look forward to from Nastee Nev in the near distant future?

I am currently on tour promoting my latest album, I’m looking forward to many gigs out there. I’m also working on my own record label ‘Nev Records’ and forming a band. The bands album will be coming out sometime next year, as well as projects from one of my label artists.

Is house music your first love? Or do you produce other types of music genres?

House music is me, its in me and its what makes me who I am. I have much respect for all kinds of music out there but house is what I produce and I love doing just that.

How can we get in touch and keep up to date with Nastee Nev?

You can catch me on my Facebook page: Nastee Nev 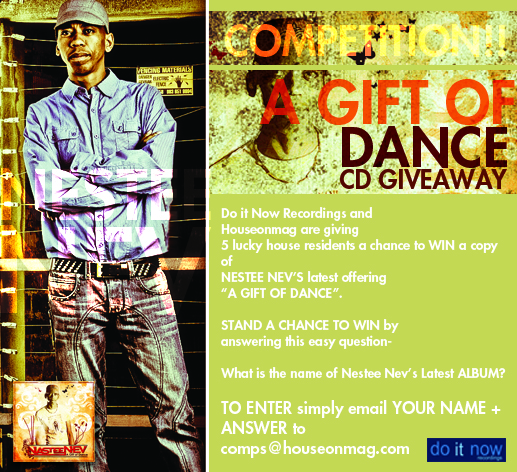