Les Nubians set to headline at the MTN Bushfire Festival 2015 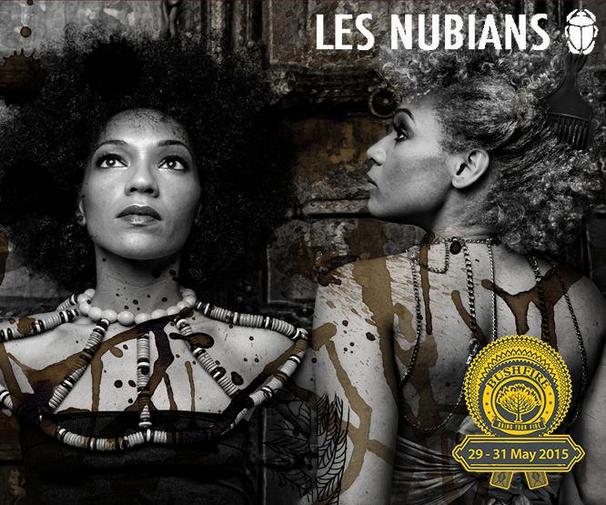 Grammy nominated Les Nubians have been synonymous with a unique Afro/European Neo-Soul sound and style for quite some time now. They gleam with ambience, the magic, the chic mystique and that ‘je ne sais quois’ that most typical Neo-Soul artist couldn’t deliver.

And even though they may not equal the mainstream Neo-Soul artists out there on sheer music industry numbers alone; the odds against Les Nubians however considering their latest album ‘Nu Revolution’ – qualify Celia and Helene’s success as being damn near phenomenal.

“Africa is our past, present and future. This album [Nu Revolution] is about accepting and rejoicing through our body and mind that Africa is vibrant and 10,000,000 times alive! Africa for the future also to say that we have to prepare the future of the continent. It’s in the NOW that we create the future – action time is now!” Les Nubians, 2015

Renowned for eclectic and multi-dimensional programming rooted in world music the MTN Bushfire Festival is a three-day music and arts festival, taking place from May 29th – May 31st 2015.

Be to be one of the music and arts fans who “bring their fire” to the scenic farmlands of the Malkerns Valley (Swaziland) to experience this unique event.

DJ InviZable & the Champions of the Sonarverse (South Africa): A master of staging creative Guerrilla performances through the guise of the most acclaimed Commander to ever lead the 1st corps, the renowned advisor to The Imperial House of Africa, DJ INVIZABLE. The man behind the mask, Nick Matthews, who comes from Cape Town, South Africa, has been a professional DJ and producer for over the last decade.

Bongeziwe Mabandla (SA): Two-time SAMA nominee, Bongeziwe Mabandla has been making waves at home and overseas with his perfect blend of urban-African folk. He has performed at festivals in Germany and Spain, as well as opening for the likes of Joss Stone during her South African tour.

Tickets are already on sale via the MTN Bushfire Festival website.

Editor’s Sidenote: You can also keep updated with the latest information on the festivals Facebook Page and join the conversation on Twitter.