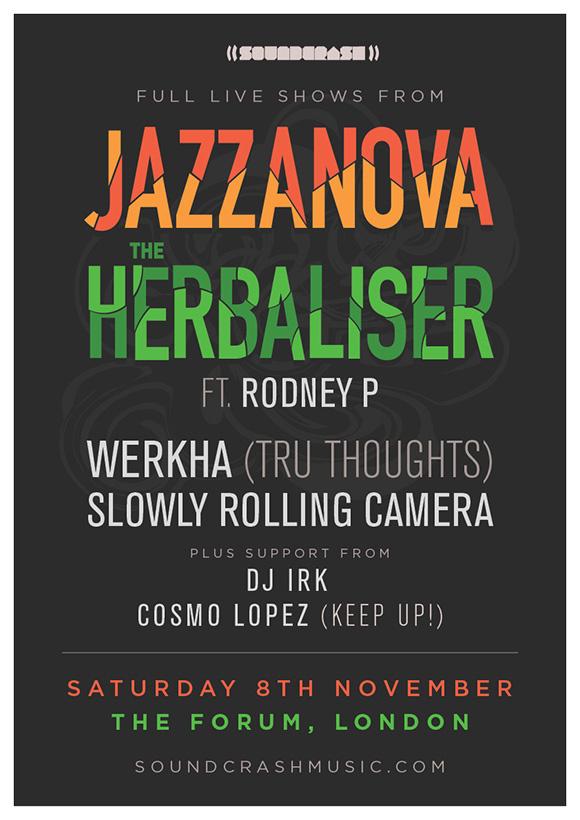 Soundcrash are delighted to announce two of the best live acts that underground music has ever seen. Both bands have an eclectic range of influences, mixing together to form two distinct sounds.

Jazzanova’s Jazz attitudes blended with dance worthy sounds will go hand in hand with The Herbalisers Psychedelic, beat-laden, post-Hip Hop Funk making this night one hell of a party.

They will be joined by a special host of guests: Rodney P, Werkha, Slowly Rolling Camera, DJ irk and Cosmo Lopez!

Whoever has had the chance to see Jazzanova play live during the last three years knows what a magical experience that this is – especially after their sold out show at Village underground in April [2014].

They have a wealth of remixes, compilations and three studio albums already under their belt. This collective of influential innovators are renowned for blending Jazz attitudes with easy listening and dance worthy sounds from all over the globe. Expect a touch of everything from Jazz & soul to German Techno.

The Berlin based outfit transports the richness and sublimity of their compositions and remixes perfectly on stage. Jazzanova are among a small and worldwide group of innovators when it comes to genres from Dancefloor, NuJazz and Broken Beat, to modern Folk and Soul.

DJs and vinyl freaks adore Jazzanova with their remixes for Masters At Work, Fat Freddy’s Drop, 4Hero and Ursula Rucker gaining them respect around the world.

The Herbaliser are back and this time Featuring Rodney P! The legendary ten piece band have been touring the globe and winning over festival audiences far and wide for over a decade.

Their fascinating ability to create timeless soul records one minute, then to delve deep into the dark, grittiness of Jazz and Funk the next is not a skill that should be overlooked!

High energy, nostalgic sounds; make The Herbaliser musical legends in their own right…

Hailing in from Manchester, Werkha is the project of musician and producer Tom A. Leah. After a big year in which his reputation has swiftly spread, this rising talent has now signed to Tru Thoughts and is putting the finishing touches to a clutch of new tunes to be released this year.

Since his debut release back in 2012, Werkha has become something of an underground sensation, gaining respect among other talents and enjoying airplay throughout Europe, most notably from the godfather of world music, Gilles Peterson.

A new project that teams pianist-composer Dave Stapleton, producer Deri Roberts, vocalist-lyricist Dionne Bennett and drummer Elliot Bennett, is proof positive that some of the most interesting work often arises from a meeting of many minds.

The result is music that has distinct echoes of the ‘invisible soundtracks’ of UK progressives Cinematic Orchestra and Portishead as well as the polychrome textures of maverick Scandinavian artists like Sigor Ros and Oddarrang.

Two-time ‘Mix of the Year’ title holder on the Solid Steel show. An explosion of beat driven, scratched up, creative sounds with a hint of brand new is what your ears should expect.

Editor’s Sidenote: For more information and to purchase tickets —–>SOUNDCRASH!